Home ❯ Tips ❯ What are the Top Trick Shots in Carrom that Beginners Should Master? 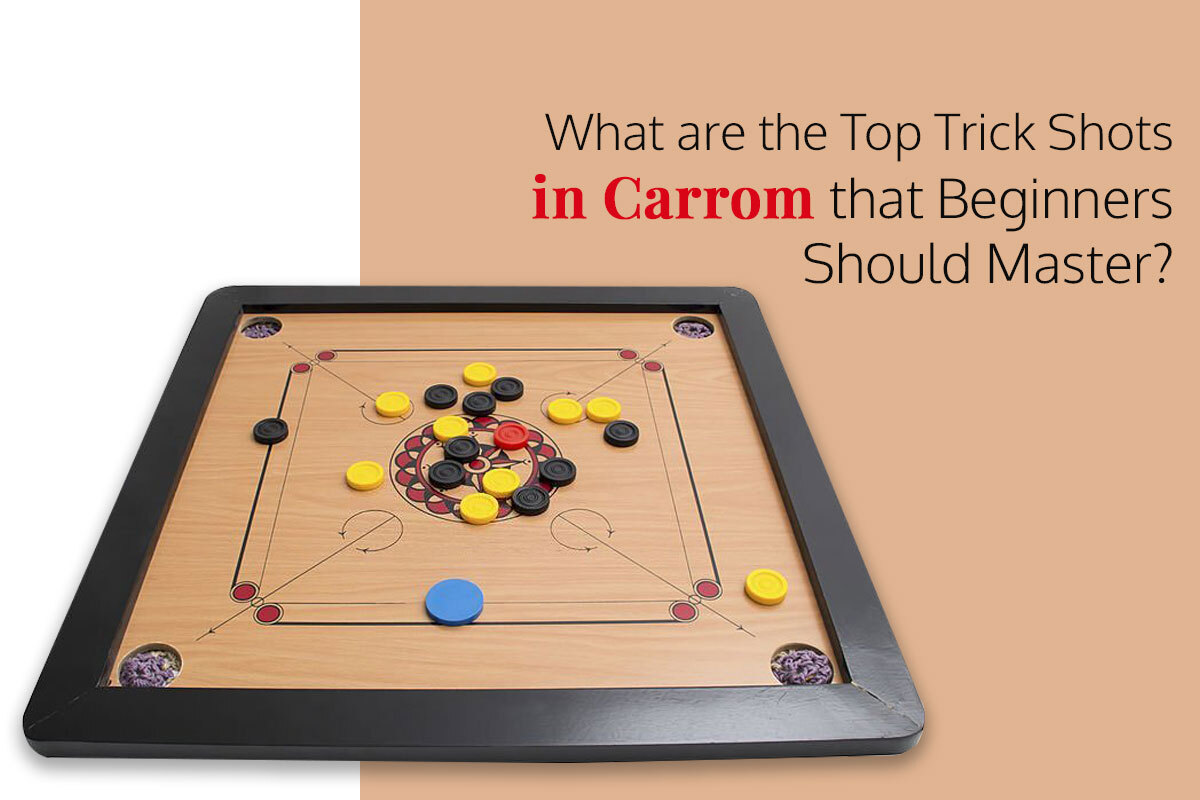 Carrom is an ingenious game of luck and precision coupled into one. It would help if you had excellent concentration, agility, and boldness to make moves that count to play proper carrom. Carrom, like Billiards, demands you to have an eye for finishing games at one go, which is sure to set you above other players.

The game can now be played online and therefore commands a broader audience than before. You can play carrom online by downloading the many apps from the internet but be wise enough to choose the one that suits your style. Most online carrom games have the option of playing multiplayer, which is a zillion times better than putting up with the system AI.

Let us go over some definite shots that will radically improve your carrom game and let you take on the top professionals in this indoor sport.

This carrom shot relies on precision and strength and depends on how you balance both. Back shots are made only when the coin you want to pocket is in a very compromising situation at the base of your side and an easy drop for the player on the other side of the board. In this case, you have to place the striker parallel to the coin’s position and then hit the top board at an angle so that on the reverse, it hits the coin and makes it drop in the pocket. This shot takes a few tries to learn, and you can master it with lots of practice, just like the expert carrom players.

This carrom shot is played right at the beginning and is most effective. All carrom coins are assimilated in the middle of the board, and when the shot is made, all the pieces get scattered in every direction, making the game anyone’s to take control of.

This shot can also be made during the middle of the game if too many coins have accumulated in the middle. The purpose of this shot is not necessarily to pocket the coins, but there always stands a wild chance of doing so as the trajectory of the coins becomes very unpredictable.

This is an upper-level shot; you can perform it after reaching more than an intermediate level in carrom playing. While playing this shot, the player uses the striker to shoot one coin on the board; his objective is to pocket another. The player has to be a master of angles and deduction if he wants to take the game to this level of expertise.

It is an improvisation on the back shot, comes with excellent knowledge on the player’s side, and can only be achieved after hours of commitment to the play. You have to understand the angle and try to hit both coins as if you only hit the first coin and it is of the opponent, and then you miss the next, it could become a foul play, and you will be penalized.

This is one of the top shots in carrom, and if you learn how to play it, then foul shots would rarely pose a problem for you in the game. The center cut is based on pure skill and is either a hit or a miss. The shot is aimed at the top corners of the board, and the coin has to be positioned in the middle for it to be called a center cut.

You hit the coin at an angle, so it gets pocketed in any of the top pockets, and your striker safely glides through the board without disturbance to other coins. This shot is primarily used towards the end of a carrom match.

This shot uses the sides of the entire board to pocket your desired coin. The specialty about this move is that you shoot the striker at an angle towards the pocket so that it rebounds to the adjacent side and then goes towards the opposite pocket, making the same connections identical to the prior and finally hitting the coin to score it.

It is important to angle the shots well so you do not miss the rebounds. Players can say it is just a fancy move, but in some cases, it does become an important play, given the position of the coins. The main problem with this board shot is that you might miss the second pocket, and the striker might drop in where you will receive a foul and lose pocketed coins and your turn of playing, so be extra careful.

Players usually play carrom using their index finger to shoot or their middle finger in maximum cases. But there are instances where the players get tired of playing with their long fingers, and then they use their thumb to make shots which are also permitted. With this shot, you can play base top shots and all around the table, but it requires more practice and is not an easy task. You must learn to command strength and aim in the thumb, so the striker does not slip out of control. Using the thumb is extensively helpful and can sometimes pack in more power from some players than the front finger shot.

There is more than one way to play any shot in carrom, which depends entirely upon the player’s jurisdiction and skill set. To master all shots, a player must rigorously practice, and the most fun is you can practice carrom all by yourself without a sparring partner. However, playing with rivals offline and online is more fun, so do not waste time and get on with your game of carrom.

The list has the most innovative shots, and you should try them out, but keep in mind that you should always place the striker between the two parallel lines while playing, or you might get a foul for no reason.